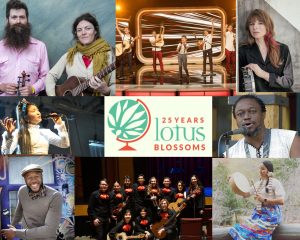 Artists participating in Lotus Blossoms share their cultural traditions with school children and teachers throughout South Central Indiana. While they are here visiting schools, many of them conduct workshops or perform at the Lotus Firebay and other community spaces. 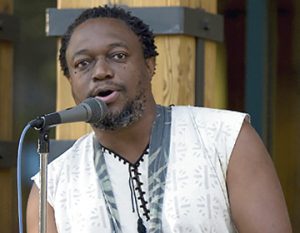 Performance artist, educator, spiritual healer, and peacebuilder, Malawi-based Masankho Banda brings the traditions of interactive storytelling, drumming, singing, and dancing to life. Masankho, who was forced to flee Malawi in the late 80s due to the actions of a brutal dictatorship, received the prestigious Unsung Hero award from His Holiness the Dalai Lama in 2001 as a result of his inspiring peacebuilding efforts. Masankho seeks to bring peace to communities throughout the world through the arts and has for the past ten years given his time and talents to Bread & Roses, a nonprofit bringing inspiration to communities in San Francisco through music, stories, and dance. 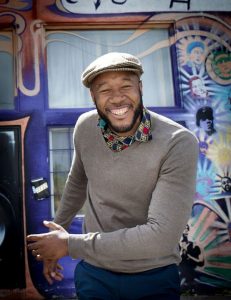 Vox Sambou is an MC, poet, and multilingual performer who writes and performs in Creole, French, English, Spanish, and Portuguese. He comes from Limbé, Haiti and is a founding member of Montreal-based hip-hop collective, Nomadic Massive. A Haitian-Canadian, his music focuses on the traditional rhythms of Haiti mixed with elements of Afrobeat, jazz, reggae, and hip-hop. Vox’s artistry is influenced by a strong commitment to calling out injustices and social imbalances. His message is one of great positivity that not only reflects the realities of life in Montreal as a Caribbean immigrant, but also the relationship between artists in the Americas. Vox is the recipient of two awards from the All African Music Awards for music collaborations with artists like Afrotronix, a Lotus World Music Festival artist in 2019. 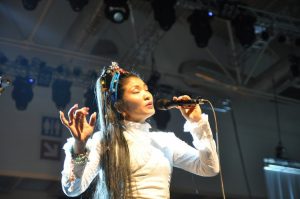 Born and raised in Lhasa, Tibet, singer-songwriter Yungchen Lhamo is known for her mesmerizing music that combines traditional Buddhist chant with her ethereal voice and unique compositions. Yungchen, whose name means goddess of melody and song, won the Australian Recording Industry Award for best world album in 1995 for her debut album, Tibetan Prayer. Yungchen has performed all over the world and has shared stages with Phillip Glass, Sir Paul McCartney, Annie Lennox, Lou Reed, and many others. In 2004, Yungchen established a foundation that inspires, improves, and empowers the lives of women, children, and those experiencing homelessness in Tibet. 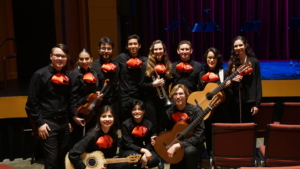 Mariachi Perla del Medio Oeste is a student group from Indiana University sponsored by the Latin American Music Center in partnership with La Casa Cultural Center and the Department of Folklore and Ethnomusicology.  The goal of the group is to share the wonderful antics of Mexican culture and its music; this is to be done by performing traditional Mariachi music while keeping in mind the rich history and customs. 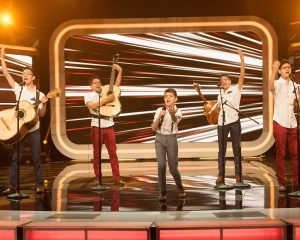 Chicago-based Cielito Lindo will bring five members of the Lucero family, who perform modern, Latino mariachi. Cielito Lindo, which is the name of a quintessential mariachi song, performs the traditional music of Mexico and cites bands like Los Lobos and Trio Los Panchos as part of their inspiration. Cielito Lindo began in 2006 when the two oldest children in the family began singing with their father and his band. The Lucero family supports themselves fully through the arts and has performed for large audiences at Chicago Bulls games, Millennium Park, the Art Institute of Chicago, and on Nickelodeon. Cielito Lindo is passionate about inspiring parents and children to enjoy music, culture, and creativity together. 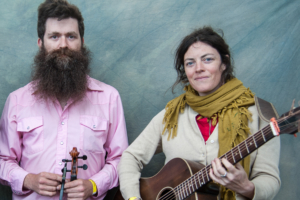 The Corn Potato String Band has earned high praise for its performance and preservation of traditional American music from Central and Southern United States. In addition to being champion fiddlers (Aaron won first place in bluegrass fiddle at the 2018 Galax Fiddlers Convention), band members Aaron Jonah Lewis and Lindsay McCaw play the banjo, guitar, bass, and mandolin. They also sing ballads and southern gospel tunes and play the heck out of hoe-downs and country rags. Additionally, the Corn Potato String Band presents crankies, which are old storytelling art forms that use a long, illustrated scroll that is wound between two spools to hand-crank scenes through a viewing box while a song or tune is played. Their shows have delighted audiences across the United States, Canada, Europe, India, and Mexico with their amazing musicianship and original interpretations. 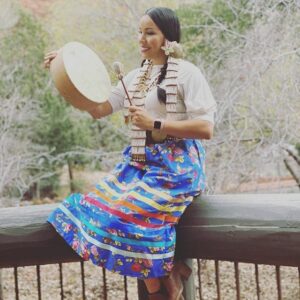 Native American hoop and powwow dancer Violet Duncan is known for her acclaimed storytelling and performances across the world. Duncan, who facilitates workshops to promote spiritual wellness and cultural education across the US, Canada, and Europe, is a proud member of the Plains Cree of Kehewin Cree Nation & Taino. She held the title of Miss Indian World in 2006 and was featured in Nelly Furtado’s music video Big Hoopsas the Native American Fancy Dancer. After becoming the mother of four children, Duncan saw a need for Native American representation in literature. Duncan took it upon herself to author the children’s books When We Dance and Let’s Hoop Dance!. 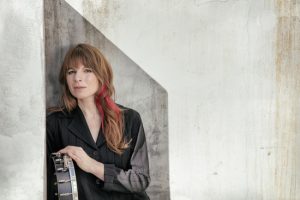 Singer and composer Moira Smiley presents her spare, vocally-driven collections of warped traditional songs to audiences across the world. Smiley, who plays the banjo, accordion, and piano, has performed with bands like Ladysmith Black Mambazo, Tune-Yards, and The Lyris String Quartet. Smiley’s compositions have been featured on platforms like BBC Radio, NPR and, ABC Australia. Smiley discovered the power of her voice right here in Bloomington when she came to the IU School of Music in 1994 to study early music and vocal performance. Smiley has led vocal workshops at universities,  high schools, and conservatories including Yale, Oxford, and the LA Master Chorale.

Please thank these sponsors for bringing artists from around the globe into schools!