Community, sustainability, and innovation: these values shape the business practices of One World Enterprises — a.k.a. Lennie’s, Pizza Express, Bloomington Brewing Company, and One World Catering and Events. A longtime  sponsor, One World’s support touches just about everything we do, including Lotus Blossoms, the Festival, Edible Lotus, and even our volunteer corps.

Director of Marketing Sara Sheikh feels fortunate to be part of One World. “We’re known for both the excellence of our products and our community giving,” she states. “And we like to say that we do business in a way that makes you feel good about doing business.” This is also how Sara sees One World’s partnership with Lotus. “We’re aligned in our values within the community,” Sheikh says. “Like us, Lotus brings something very special to Bloomington.”

Sara likens the entrepreneurial nature of One World Enterprises to the Yin / Yang symbol, with owners Jeff Mease and Lennie Dare representing the balance between big-picture ideas and the practicalities of running a viable business. It is also an apt image for One World’s support for Lotus, which moves between sponsorship and in-kind contributions, encompassing the Lotus World Music & Arts Festival, Lotus Blossoms, and the Edible Lotus fundraising party. 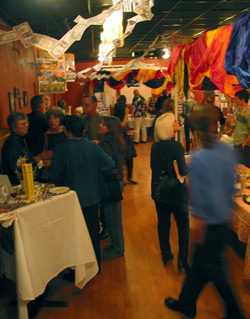 “Lotus Blossoms is a natural fit for Pizza X,” Sheikh continues. “It appeals to kids in the ‘pizza market’, and more importantly, it helps bring a really special experience of Lotus artists to kids in local schools.” {Pictured at top: Australian storyteller Paul Taylor visits the Bloomington Boys and Girls Club; photo by Lizzie Plant.}

One World takes its homegrown roots seriously, and was one of the first businesses to embrace the “grow local” ethos. “Lennie’s kitchen sends its scraps to Loesch Farm for composting. Brewer Floyd Rosenbaum has made use of the farm by growing hops, and he’s already grown a couple of batches that we’ve used for specialty ales at Bloomington Brewing Company,” Sheikh explains. “And Edible Lotus’s promise to showcase ‘the best of Bloomington’ makes it another natural place for us — Lennie’s and BBC — to be.” 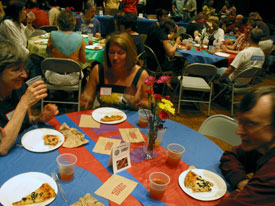 For years, Pizza X (formerly Pizza Express) and Bloomington Brewing Company have also been behind-the-scenes Lotus sponsors, supporting Festival artist hospitality and the Lotus volunteer corps. “The Festival artist party — that’s just fun, and we’re flattered to be part of it. But the Lotus volunteers — they’re the best; hard-core true believers, fresh and always enthusiastic, and it’s a real honor to give something back in recognition of all they contribute to the festival and to the community as a whole.”

One World’s business model has been Bloomington-centric until very recently. “It’s grounded in a vision that appeals broadly both in-house and to the demographic that we serve,” Sheikh continues. “We’re unusual in sharing something — a commitment to community giving — that’s closely tied to the Bloomington identity, and we weren’t sure that it would work in a different place.” But as Pizza X and Bloomington Brewing Company begin to grow, to Bedford and Indianapolis and beyond, Sara and her colleagues are exploring ways to show those new customers the value of community partnerships. 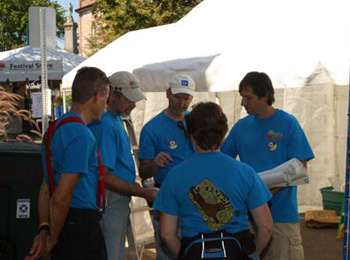 Volunteer confab at the 2011 Festival. On the back of our Lotus volunteer T-shirts, you'll see a Pizza X logo.

More about One World Enterprises…