Cairril Mills is one of those rare people who moves seamlessly between right- and left-brain function – she is equally renowned as an exacting businessperson and for her artistry and innovative thinking. Cairril is also one of an exclusive cohort of those who have both sponsored the Lotus Festival and performed on a Festival main stage.

In another incarnation, “I would be making and producing world music, and bringing that music to more people,” she says. As it is, Cairril is a key member of the a cappella group Kaia and owner of the national award-winning Cairril.com Design & Marketing. {Above: Cairril on stage during the 2009 Lotus World Music & Arts Festival; photo by Jeff Hammond}

Providing brand development and print and web design for clients that include Monroe Bank, Canine Companions, and Andrews, Harrell, Mann, Carmin & Parker, Cairril.com Design & Marketing and Lotus go back over a decade. “In fact, the anniversary of my business coincides with the Festival, and I celebrate each year with a competition where my clients can win two free tickets to the Festival,” Cairril declares.

“There is nothing bad about Lotus,” she says. “It’s an immersive experience that is wholly linked to its strong brand – the people, the music, the lights, the street scene, the design … and I want to help make it a reality.”

And she does. Cairril.com Design & Marketing sponsors the Lotus World Music and Arts Festival because “providing Lotus with support is my number one sponsorship priority.… The Festival is a picture of how the world could be, an alternate universe that I want to be part of.”

Cairril has experienced Lotus from all sides. Kaia sang at the 2007 Edible Lotus fundraiser. In 2009, they were featured Festival artists, performing in the United Methodist Church and at Lotus in the Park, presenting a singing workshop in the IU Global Education Pavilion.

“We felt like rock stars!” Cairril laughs. “Being on a main stage took us to a new level. … Exposure to a new audience was great, and we were able to share experiences with other artists from all over the world. … We also learned from Little Cow about how to deal professionally with unexpected things like equipment exploding onstage!” 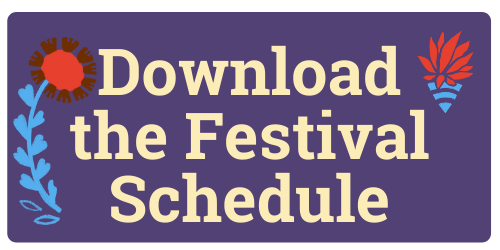