When was your first Lotus Fest?
The second year, in ‘95

How many have you attended?
I’ve attended at least one event of about 10 festivals.

How did you first cross paths with Lotus?Favorite Festival memories?
I first learned about the festival from James Combs when it was still just an idea he was cooking up with Lee Williams and Shahyar Daneshgar.

Favorite artist/performance memories?
The first year I attended will always be special because it was so new and surprising and small and intimate. But my favorite festival experience was in 2002, the year Lo’Jo, Gangbé Brass Band, and Miguel Poveda performed; there was just an especially wild convergence of cathartic, festive energies. It might also be one of the first times I was really aware of the performers being out and about and partying with the rest of us. Others that stand out are Susana Baca, Barbarito Torres, Väsen’s first year, Huun-Huur Tu… these are from the early years  since I haven’t attended in quite awhile, but they still resonate.

Have you performed other tasks, volunteered, or assisted with Festivals in previous years?
I was on the publicity committee for many years and created marketing materials and t-shirts and ultimately the festival logo and branding that it is still in use today. It’s pretty exciting to see how established and versatile the lotus graphic proved to be and to see it projected on buildings and stuff. It ranks among my favorite projects ever.

What is your artistic background?What inspired this design?
I’m a graphic designer by profession, but for this design I chose to work less literally than my work usually requires and to allow more intuitive, playful connections and images to happen. I really wanted to emphasize the 25 for the anniversary, and the numbers suggested spiral forms that then became a little callback to Karen Combs’ design from the first year. Also, at the time the request came in for me to work on this, I was in Argentina and obsessing over a pair of silver-heeled tango shoes: what I call my dragon mermaid shoes for the green marine/reptilian-like material they’re made from. It was a short poetic leap to map those ideas onto the spiral numbers. For me, they represent a dive into the realm of creativity, mystery, and combined, elemental energies that are at the heart of the festival.

Do you have any words of advice or experience to share with someone considering attending their first Festival this year? Why should they go? Why might they be remiss if they don’t?
Every single year I attended there was at least one experience — a performance, an encounter, a revelation — that was unexpected and meaningful. By all means go with a plan of what you’d like to see or do, and then get ready to throw that plan out and ride the wave that will inevitably sweep you up. The best discoveries are those you didn’t know you were looking for, and Lotus will provide those in abundance! 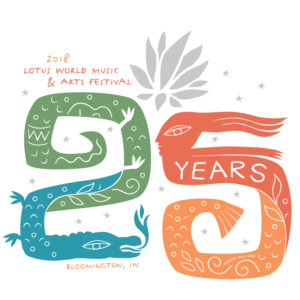