In 1994, a fledgling local business risked some precious cash to become a charter sponsor of a new, unproven world music festival in Bloomington. Co-owner Mark Hood reflects on Echo Park Studio’s nearly two-decade sponsorship of Lotus and how the two have grown up together in Bloomington’s expanding cultural landscape. Photo courtesy of Indiana University

In 1994, the recording studio that Mark Hood founded with Mike Wanchic had just celebrated its first anniversary – when the telephone rang. It was Shahyar Daneshgar, one of the first Lotus organizers. “He said, ‘There’s something new and exciting happening and you need to be part of this,’ and proceeded to tell me all about this new festival project he was involved in, and how he wanted me to write a big check as a sponsor,” Hood laughs. That call led to a tradition: Echo Park Studios is the only organization that has been a Lotus World Music and Arts Festival sponsor every year since its inception. 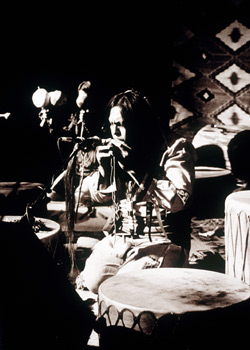 Taos Pueblo musician Robert Mirabal at the 1997 Festival; he later collaborated with Mark Hood, Mike Wanchic, and Echo Park Studios on a number of projects. Vintage photo by Sylvia Aronson.

Mark’s involvement with Lotus deepened in the late ‘90’s, when he joined the Board. “It was a fun time with a young organization,” he recalls. “We were like an emergency squad: entrepreneurial, hands-on, dealing with things for the first time like finding venues, closing Kirkwood Avenue, fixing electrical problems, helping [Lotus Director Lee Williams] with various crises.”

As the organization matured and the Board began to focus on Festival fundraising and long-term planning, “it was a real education for me, moving out of a crisis-solving mode and starting to think strategically about increased community expectations and support for Lotus,” Hood recalls. 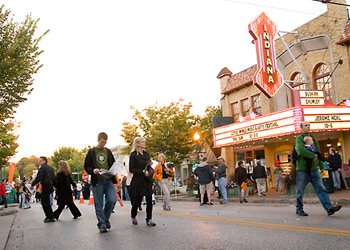 Lotus crowds in front of the restored Buskirk-Chumley Theater. Photo by Levi Thomas.

Those skills were put to the test when Mark became part of the Lotus Board Task Force tapped to provide transitional management for the newly restored Buskirk-Chumley Theater. “That WAS an education,” he laughs. “We really debated whether this was something Lotus should take on. But the City and [then Mayor] John Fernandez were seeking an organization to take the lead – one that was fiscally responsible and had a spotless reputation – and Lotus was their choice.

Mark went on to serve on the Board of BCT Management, Inc., which manages the Buskirk-Chumley Theater, and a decade later is still proud of having helped ensure a secure future for that downtown treasure. 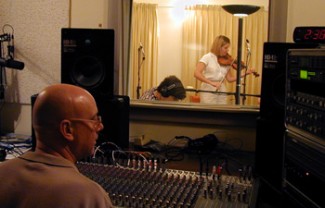 Mark mixes sound at WFHB community radio for a Lotus Friday in 2000. In the studio, Hot Club of Cowtown. Photo by Kevin Atkins.

Lotus’s education mission resonates strongly for Mark. “I believe that music has a unique ability to continually teach us about ourselves and our fellow humans, no matter our age. Lotus Blossoms was an obviously appropriate extension of Lotus’s core mission. Reaching school-age people with the dual message of how diverse human culture is, yet how much we all have in common is exactly what I see as Lotus’s reason to exist. In a way, we adults are a much more hardened target, but the magic of music in general and of the Festival in particular is that boundaries and pre-judgments can be suspended and dissolved in a special, safe environment of sharing and celebration. This is my experience of Lotus and my hope for its future mission.”