As a nationally – and sometimes internationally — touring contradance musician, a former Lotus performer, and an avid participant in residence artist programs connected to schools, libraries, and dance camps, artist Sam Bartlett is no rookie on the artist scene. In fact, the 2016 Festival volunteer tee marks the second time Sam has conceived Festival artwork (he’s the mastermind behind the popular 2009 Festival tee, too). 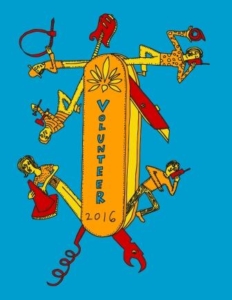 A Vermont native, Sam has resided in Bloomington for 23 years.  When not touring, Sam takes advantage of his opportunity to see a vast array of artists perform while he travels, and he often suggests potential artists to be considered for future Festival lineups.

Sam has participated in the Festival in nearly every possible way: as performer, artist, volunteer, and attendee.  His roles have included dancer, artist, builder of paper mache display pieces, and workshop leader.

Despite his vast experience and involvement with the Festival, Sam focused on his experience as a volunteer to create the concept for the 2016 volunteer shirt.  As a former volunteer, Sam thought about all the tools a volunteer might need to be successful, and he eventually landed on a design that resembles a Swiss Army knife.  He did some internal polling to decide what tools to include — of course our ubiquitous zip-ties made the cut, but Sam was mildly disappointed that he couldn’t find a way to incorporate snow fencing!  Maybe next time….

With so many Festivals under his belt, Sam is hard-pressed to select just one moment to serve as his favorite Lotus memory.  “My single best moment musically at Lotus: Going out with Abby Ladin and seeing Mucca Pazza, the insane, Chicago based marching band. In all my years of seeing performance, I’ve never been so enthralled by a musical spectacle.”

Our amazing Lotus volunteers were proud to wear Sam’s design throughout Festival weekend — a huge thank-you on behalf of Lotus and the entire 2016 volunteer corps!