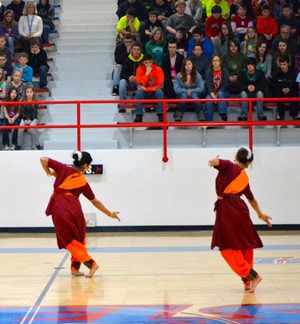 If you are interested in bringing a Lotus Blossoms artist to your school or organization, please fill out the 2015 Lotus Blossoms scheduling survey. Contact Outreach Director Loraine Martin at 812-336-6599, or loraine {at} lotusfest {dot} org for more information:

Aallotar (pronounced (OWL – eh – tar) is a transatlantic collaboration between Finnish-American violinist Sara Pajunen and Finnish accordionist Teija Niku. Niku, from Haapavesi, Finland, plays the same 2-row accordion on which she explored Finnish polka repertoire as a child. Pajunen traveled to Finland from her native Minnesota every four years as a child to perform. Singing in both English and Finnish, Teija and Sara pay tribute to their respective cultures, which — although they pulsate with many of the same values and energy of 100 years ago — have grown apart. The music of Aallotar is an exploration of those differences, with the intent to create new harmonies that bridge the expanses which water has filled. See sample video of Aallotar here and here.  Available February 16 – 17 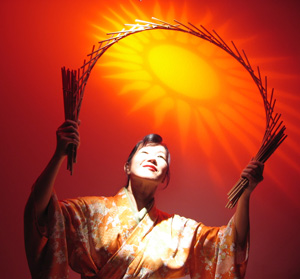 Kuniko Yamamoto (coo-NEH-koh  yah-ma-MOW-toe) enchants audiences of every age with dramatic storytelling that includes myths and fables from ancient and modern Japan. Kuniko uses traditional Japanese music, handcrafted masks, and stylized movement to create an beautiful balance of illusion and reality. She is also skilled in origami, using folded paper animals and faces to bring folk tales alive for young children. Every program encourages audience interaction and participation, with each narrative carefully selected for cultural and moral perspectives. Trained in dance and traditional arts in her native Osaka, Japan, Kuniko has lived in Florida since 1992.  See sample video of Kuniko here.  Available February 17 – 19 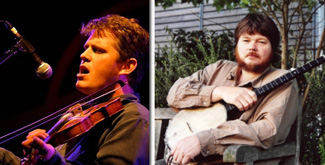 Dirk Powell learned guitar from his father, and banjo and fiddle from his grandfather. He studied classical piano early on, but found that the music being handed down to him by family members resonated more deeply with the stories he wanted to share. This love for traditional music found him spending most of his teenage years traveling around remote parts of the southern U.S., eventually landing in Louisiana, where he learned Creole and Cajun music. Riley Baugus represents the best of old time American banjo and song. His powerful singing voice and his expert musicianship place him squarely in the next generation of American traditionalists. Starting on the fiddle, Riley quickly moved on to the banjo, building his first instrument from scrap wood with his father. Riley worked with Dirk to make music for the film Cold Mountain and has been touring, teaching workshops, collaborating on award-winning albums, and building banjos ever since.  See sample video of Dirk, Riley, and the duo together.  Available February 23 – 25 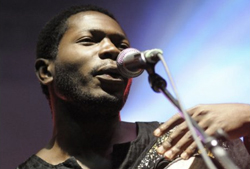 Born near Lake Victoria in Uganda, Herbert Kinobe (pronounced chih-NO-bay) is a gifted Ugandan multi-instrumentalist, vocalist, and composer known for his inspired synthesis of African roots and global fusion. He has played in nearly every country in Africa, absorbing different musical traditions as he traveled. He has also performed and given workshops across Europe and North America, showcasing the diversity of traditional African instruments. See sample video of Kinobe here and here.  Available March 23 – 25 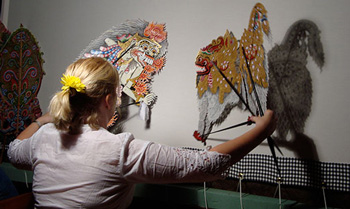 Performing at the Friday Lotus Blossoms Bazaar; open only to MCCSC and Monroe County private and charter school 4th-graders

Jennifer Goodlander is an assistant professor of Theatre History, Theory, and Literature in the Department of Theatre and Drama at Indiana University. A scholar of Asian performance, she has presented and taught performance methods from China, Japan, India, and Indonesia. Her practical training in Balinese shadow puppetry — wayang kulit — led to her ritual initiation as a dalang, or master puppeteer. Jennifer’s performances are built on traditional myths and stories using shadow puppets, music, and narration. Her work has won grants and awards from Union International de la Marionette (UNIMA), the Andrew W. Mellon Foundation, and the Fulbright Scholar Program: Jennifer performed “Dimba and Dimbi,” a Balinese shadow puppet show, at the UNIMA Asia-Pacific International Puppet Festival in Nanchung, China this past summer, where her troupe won an award for group performance. She is the vice president and conference planner for the Association of Asian Performance and is completing a book manuscript tentatively called “Women in the Shadows: Gender, Puppets, and the Power of Tradition in Bali.”

Visit the Mathers Museum of World Cultures for an exhibit of Indonesian Puppetry, “Still/Moving: Puppets and Indonesia.” The exhibit, which is co-curated by Goodlander and her students from the Department of Theater and Drama’s Museums and Performance course, will be on display through Indiana University’s spring semester.