Previous Next
Tamara Loewenthal with the members of Kinobe & the Wamu Spirit, 2015. (Photo by David Lawler)

“My ears will never be the same again, after hearing their music.”
– 4th grader, Harmony School, with Kinobe & the Wamu Spirit

For 20 years, Lotus Blossoms Education Outreach has brought children, underserved populations, and the Bloomington community into close contact with new cultures, new music, and new creative skills.  Lotus Blossoms artists are some of the world’s best ambassadors and communicators . . . but their voices couldn’t be heard (literally!) without the hard work of some unsung Blossoms heroes:  our dedicated audio engineers, who have been trekking across counties to school gyms and community venues for years to bring Lotus to life for all ages.

Jamie Gans has been running sound for Lotus Blossoms since at least 2003, joined in the last few years by his wife (and Lotus Volunteer Coordinator) Tamara Loewenthal.  Being at the soundboard allows them to observe both band and audience, and also provides one-on-one time with artists from around the world.  Tamara give kudos to artists who find multiple ways to engage their young audiences, getting them involved by clapping out particular rhythms, singing a chorus, or moving arms or feet in response.   “Kalapriya did this wonderfully last year,” she recalls, “and this year, Kuniko and Kinobe both were superb at pulling audiences in.”  Jamie has his own favorites from Blossoms past, including Quebecois groups Le Vent Du Nord (2004) and Genticorum (2014) – “Because I was once a resident of eastern Canada myself, I know some of the artists from both bands and it is always fun to work with friends as well assist them to exhibit their artistry.”  He also enjoyed getting to know The Orchid Ensemble (2010) and learning from them about the subtleties of traditional Chinese music. And the connections last long after the performances, adds Jamie: “I am still Facebook friends with each of the band members!” 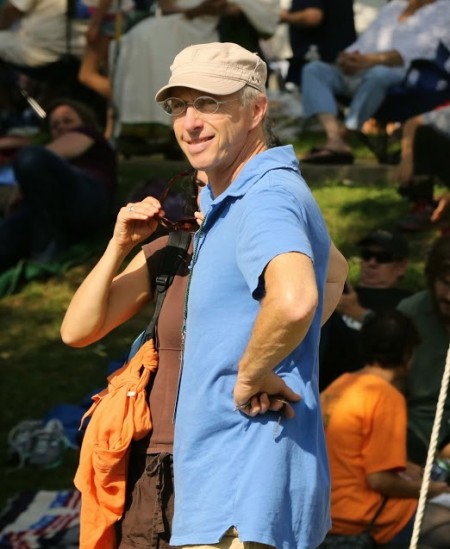 Jamie Gans at Lotus in the Park 2013. (Photo by Andy Qualls)

Jamie and Tamara have also been Blossoms performers themselves (as Fiddle ‘n’ Feet), and appreciate the value of Lotus arts education from both sides of the microphone.  Jamie recalls their 2013 Blossoms performance, after he had recently become an MCCSC employee: “It was a joy to surprise some of my 4th grade students during one of our Lotus Bazaar performances offering them entertainment instead of just discipline. Those who are now 6th graders whom I still know have not forgotten our show.”  Tamara adds, “It is not just music/art that Lotus Blossoms exposes children to, but a particular world culture, and you add another layer, expanding the range of understanding and acceptance those children will have when they reach adulthood.  It’s a special thing to witness, and it makes the best case for world peace by promoting world culture.”

Thank you to Jamie and Tamara for being behind-the-scenes superstars!  Their work truly amplifies our mission and makes global voices heard, for audiences of all ages.