Members of Indiana University’s Ukrainian Club connected with the avant-garde ensemble DakhaBrakha on Lotus weekend, and Ethnomusicology grad student Shaun Williams had a chance to talk to the band about their music, their creative process, and their impressions of American audiences as they embark on their first U.S. tour.

DakhaBrakha defies popular preconceptions of Eastern European folklore. Their sound is characterized by a layering of traditional Ukrainian female vocal harmony over deep, pulsating drum beats and cello textures that fluctuate from delicate pizzicato to raw, grinding chords. The band’s costumes and stage presence are also integral to their performances: elongated black woolen shepherd’s hats and white gowns worn by the three women.

How did the group come together?

Iryna: We three [Iryna, Olena, and Nina] have been singing together for more than 25 years—since the third grade. We started in the youth ensemble Yavoryna (“Sycamore”) and one after another, we enrolled at the Kyiv National University of Culture and Arts in the music department, and started learning about folklore on a deeper level. We went on field expeditions to the countryside every year and collected recordings of grannies singing traditional songs.

The three of us attended a show at the experimental Dakh Theatre and met the director, Vladislav Troitskyi. He liked our singing but said, “You’re just recreating folklore; you need to sing from the soul.” After that, we started to work on creating our own music. 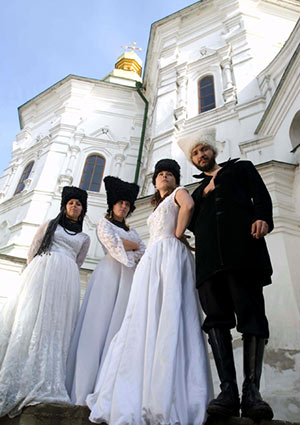 Are your lyrics traditional?

Iryna: Yes. We try to preserve traditional lyrics and melodies while adding our own original rhythms and harmonies.

Olena: We’ve also written original lyrics in English, German and French. We like to play with language; Marko will come up with a topic and we’ll write some lyrics around it.

What’s your first impression of the US?

Marko: We’re all more or less influenced by American films; you get the impression that you’re in a movie. It reminds me of the kind of scenery and people that I’ve seen in Jarmusch or Tarantino films—the clothing, big cars, and wide-open spaces.

How do American audiences differ from those in Ukraine?

Marko: Back home, our audiences already know us well. Here, we’re starting from scratch, and it’s really nice to get such a warm, emotional response from people who have never even heard us before. … Of course, they don’t understand our lyrics, but for me, the text isn’t the most important thing—it’s about the melody, the atmosphere, everything combined.

You have previously stated that in general, Ukrainians have poor taste in music. Do you think Americans differ in this regard?

Marko: It’s a different historical situation. In [soviet] Ukraine, the aesthetes and intelligentsia were literally eradicated, and the result is that few people remained who understood, say, jazz or opera. Of course, in both our countries, commercial pop music dominates the airwaves. The difference is that in America you have a lot of festivals. You have a lot of choices and outlets for many other styles of music.

You call your music “Ethno-chaos”; what’s chaotic about it?

Marko: It’s about our creative process. It’s like the creation of the universe—somehow out of these chaotic elements, a comprehensible structure emerges and leads to a composition. … We’re open to all genres and styles; we never limit ourselves stylistically. We’re always experimenting with different genres and collaborating with groups that play other styles of music.

Iryna: Each composition comes together like a puzzle; we all search for the right pieces and in the end a finished picture emerges.

Marko: We listen to a lot of world music—like Tinariwen from Mali, Mamadou & Mariam, also electronic music like Bureal, even dubstep.

What’s the next step for you creatively?

Marko: It’s good that we’re busy touring, but we’re also eager to take some time to work on new material; it feels like we’re carrying around a lot of new ideas that are ready to be made into something. Besides, a lot of people are asking, “Where’s the new album?” Where our muse will take us next is anybody’s guess.

Shaun Williams is a musician, documentary filmmaker, and graduate student in Ethnomusicology at IU in Bloomington. His research on traditional Romani wedding music is based in the Carpathian mountain region of Western Ukraine and Northern Romania. 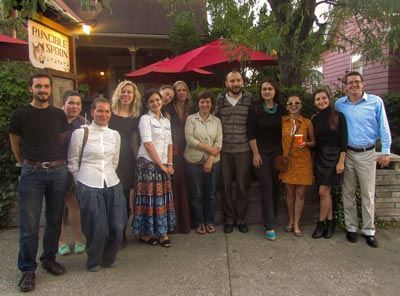