Jillian Kinzie moved to Bloomington 20 years ago and weeks later found herself volunteering for the 2nd annual Lotus World Music & Arts Festival.  Like so many of Lotus’s loyal volunteers, Jillian’s been a devoted volunteer since.

Not too long after serving on the front line, Jillian and her husband, Jo Throckmorton, realized that the Festival is dependent not only on volunteer time, but also on financial support.  For nearly 15 years Jillian and Jo have made a commitment to donating both their time and financial resources to ensure that Lotus continues to be a cornerstone of our community.  With Festival admission sales covering just 50% of the total costs of Lotus programming, they realized that as Lotus Lovers they can serve Lotus in several ways.

Jillian is not the only volunteer that donates her multiple resources. In fact, over 30% of repeat Lotus Volunteers are Friends of Lotus financial supporters. Another Friend of Lotus, Bob Flynn shares:

“Lotus has been a part of our lives for nearly 20 years. The Lotus Blossoms Bazaar and the Festival are sacred annual rituals for my family. My daughter says Festival weekend is better than Christmas. Lotus is one of the things that makes life in Bloomington so special. We actively give back for all Lotus has given us. Lotus is an important part of our annual charitable giving, and we volunteer to help at the Festival every year. This year my daughter is finally old enough to volunteer herself. Christmas doesn’t stand a chance!”

Just as Festival attendees can look around during the Festival weekend and be awed by a sea of Festival volunteers in matching tshirts, let’s join together with Jillian, Bob, and many others to make the Volunteers of Lotus giving group stand strong among corporate sponsors.

Our goal is to raise $2,500 to go towards the cost of keeping Lotus alive as a vital force in our community.

We encourage Lotus Volunteers, old and new, to be as generous as you can, but a gift of at least $30 will push Volunteers of Lotus to be among the many Corporate Sponsors. Together, let’s harness the collective power of Lotus’s strong volunteers!

If you are interested in joining Volunteers of Lotus, there are several ways to let us know you are on board:

Thank you for supporting Lotus, and for helping Lotus create and carryout visionary programming that nurtures our curiosity about different cultures, people, and places.

Each Volunteer of Lotus donor will be listed as a Friend of Lotus; if the Volunteers of Lotus group meets its goal, the group will be named among the Festival’s corporate sponsors, acknowledged at selected Lotus performances, and listed in Lotus publications and websites. 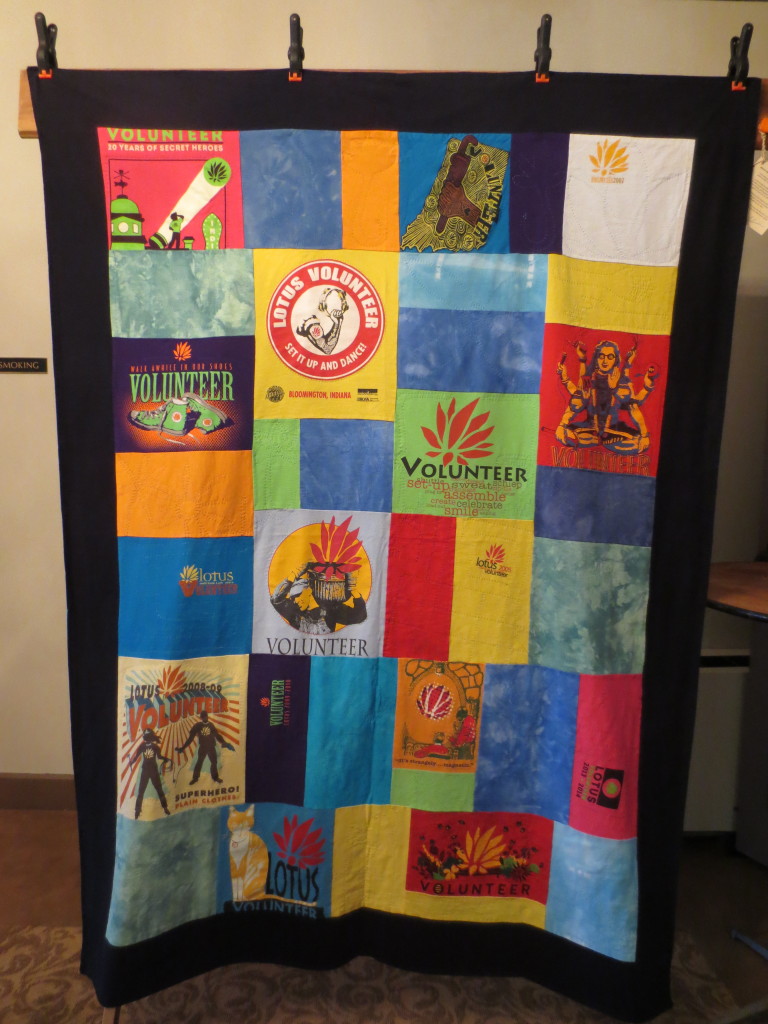 A full view of the volunteer t-shirt quilt.