Bill Holladay has been a Lotus enthusiast since the very first festival. Since then, he’s volunteered in a variety of positions. We talked to Bill about the experience of volunteering for Lotus for the past 17 years.

a marketing manager at the IU Foundation. I write and edit fundraising publications, both for the web and for print. I also teach yoga at the Y, as does [my wife] LuAnne, although that’s definitely more of a hobby.

My first Lotus volunteer gig was . . .

after I attended the first Festival in 1994. I was not involved with that first one, but I wanted to help make sure there was a second. So after the festival, I offered to write a fundraising proposal. (It was a ridiculously ambitious one, in hindsight, but it helped make the case for supporting the Festival). Since then, I’ve done various things, but my most consistent role has been as the “signage captain,” being in charge of the crew that sets up the tent and venue signs for the Festival. It’s fun to be the designated team that handles this, and we’re very proud of our little piece of the Festival. I also do various things for Lotus Blossoms and the Bazaar in the spring, and I’ve even helped out with Edible Lotus. 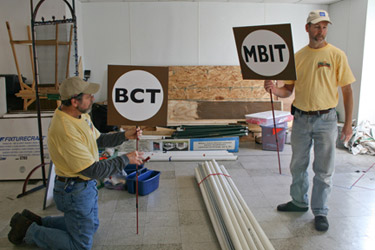 The best thing about being a Lotus volunteer is . . .

Lotus is like this amazing party that Bloomington throws every year, and everyone gets to come. When you volunteer, you get to be one of the hosts. You get to help people have a good time. It’s a point of pride to be able to say, “I help make that happen every year.” Also, with Lotus Blossoms, you get to see all these nine-year-olds running from station to station at the Bazaar. You haven’t lived until you’ve seen that; they are so excited and engaged. It’s some of these kids’ first experience with other cultures. It’s a joy to see.

My most memorable moment as a Lotus volunteer was . . .

not signage stuff, actually. After the signs are all up, I often act as a runner at the Lotus office, helping deal with whatever crises might arise. In 2001, they asked me to drive up to the Indianapolis airport to pick up Bernice Johnson Reagon, who founded Sweet Honey in the Rock, because of a post-9/11 travel snafu. I got to make the drive back with this amazing woman. We talked the whole way; turned out we had a lot in common, starting with the fact that we’re both from Georgia. It was this unexpected opportunity coming out of disaster. In fact, that whole 2001 festival was memorable, coming so soon after the attacks—such an outpouring of community, and such a warm welcome for the musicians who managed to get here.

Aside from Lotus, I also volunteer for . . .

the Sassafras Audubon Society, because I’m a birdwatcher. I also do some things with the Indiana Limestone Symposium, but Lotus is my main volunteer commitment. 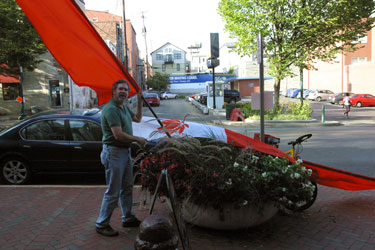 Bill, "off-duty" but taking care of flags before a 2010 Festival concert.

If I could give one piece of advice to future Lotus volunteers, it would be . . .

First, volunteer because you believe in Lotus and what it’s all about. You should do it because you want to do this cool thing for Bloomington. Second, don’t be afraid to sign up to do something new. There are lots of different jobs, and they’re all important. And each one gives you that sense of helping to put on the party. Be up for anything, because you never know what you might be asked to do. And that’s half the fun.

Want to find out more about volunteering for Lotus? See the Volunteer section of our site, or send an e-mail to volunteer [at] lotusfest [dot] org  — we’ll add you to our mailing list.