As perennial supporters of Lotus, Armen Vartian and Candice Foss contributed a crucial element in Lotus successfully delivering over 10,000 stars to the One Million Stars to End Violence project. The husband-wife duo work at the same law office, where Armen specializes in legal issues relating to art and collectibles, and Candice acts as a managing partner.

Through her role on the Lotus Advisory Board, Candice heard about the One Million Stars to End Violence project from Lotus staff. She quickly enlisted Armen to join her in the project.

“I became a star weaver and taught other people how to make them during the Lotus Festival in as well as at several other events,” said Candice. “Teaching others to make them was fun, too, and I was surprised at how intuitively even young children took to making them. It was very satisfying to see how beautifully they turn out too.”

Candice contributed over 150 stars made from a variety of materials, like the cover of the New York Times Magazine section, construction paper, newspaper, and florist ribbon. Armen contributed stars during the Festival in September and again during a MLK Day event at the Mathers Museum. It was Armen’s stars that were able to provide a huge help for the community’s stars to travel to Australia and be a part of the final exhibit of the project. 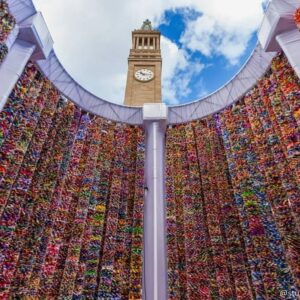 “The fact that I had made stars myself is what convinced my corporate client to underwrite the shipping costs, I sent him two stars so he could see what I was talking about,” said Armen.

Armen’s corporate client, Great Collections, decided to underwrite the S&H costs associated with delivering over 10,000 stars from Bloomington to Brisbane. On March 29, weavers from around the globe tuned in as One Million Stars organizer Maryann Talia Pau unveiled the final installation during the Gold Coast Commonwealth Games.

“Every star and star weaver is special,” emphasized Maryann. “Thank you for contributing stars towards this record-breaking installation that will inspire the world during the Games. What an amazing platform for us to send our collective message for global peace.”

The meaning of the project touched both Armen and Candice, and both agree that it provided a powerful message during the presidential election. “As people from all over the world have been involved in creating the stars in hundreds of star weaving communities, it was an antidote to the hate and nationalism that are on the rise both in the US and other countries,” said Candice. “And the quotation by Martin Luther King that Maryann found about returning love for hate is a daily reminder to me.”

“I support the concept that hate and violence can be defeated only by appeals to love and human community,” Armen agrees. “This was important during the Lotus Festival, which was during the Presidential election campaign, and is even more important now. Promoting the stars program helps to promote those goals.”