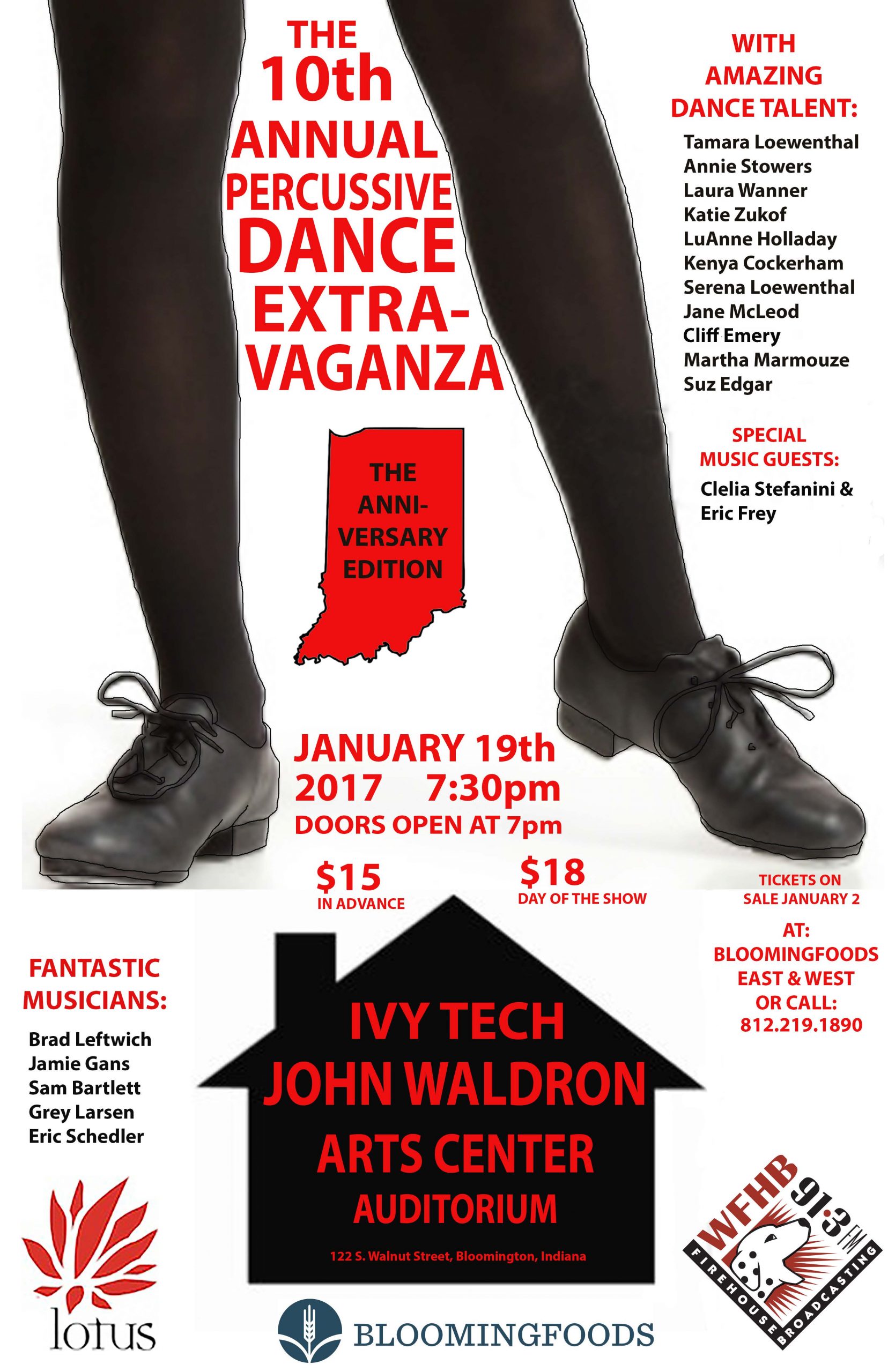 The 10th Annual Percussive Dance Extravaganza celebrates a milestone: what began as a showcase for Tamara Loewenthal’s work with her students and friends has, over the last decade, blossomed into a dance company with a strong repertoire – the Foot Squad – that now performs around the state. With each successive Extravaganza, the “house band” has only gotten better, with guest musicians playing alongside a formidable array of the region’s best Old-Time musicians. There’s nothing else like it in Indiana, and we’re proud to celebrate our tenth year of presenting rousing Old-Time music, sharp percussive dance based in Appalachian flat-footing, and an original community celebration of music, dance, and creative expression.

For our 10th edition, we are being especially extravagant, with two special guests travelling from Nashville, Tennessee to join our musical feast. Clelia Stefanini brings tremendous fiddle chops as well as a little bit of dancing to our stage, and Eric Frey (The Revelers; Red Stick Ramblers), adds terrific bass and guitar in both the Old-Time and Cajun genres — see below for guest-artist bios! Clelia and Eric will also offer workshops on Friday 1/20, prior to a special evening square dance – click for details. The Extravaganza house band includes top-notch fiddlers Brad Leftwich and Jamie Gans; multi-instrumentalist Sam Bartlett on banjo, guitar, and mandolin; Grey Larsen on flute and piano; and Eric Schedler on accordion. The dancers, led by Tamara, will perform some exciting new works, along with old and new favorites. This year’s expanded cast will be sure to entertain you mightily!

Co-sponsored by the Lotus Education & Arts Foundation, with support from Bloomingfoods, Bloomington Old Time Music and Dance Group, and WFHB.

More about the guest artists:

Clelia Stefanini has won top prizes in numerous fiddle and band contests around the South. She placed 1st at the Appalachian String Band festival in Clifftop, WV, in 2013, and more recently she came in as the Runner-Up in Nashville’s own Grand Master Fiddle contest, and is the reigning Tennessee Valley Classic Old-Time Fiddle Champion in Athens, Alabama. She is also an instructor at various fiddle camps around the country. When requested, Clelia also has some mean dance chops she can bust out.

Eric Frey has been playing the upright bass since he was 8 years old. In 2003, he was hand-picked to join the Red Stick Ramblers and became an invaluable addition to their brand of Cajun Gypsy Swing. Over the years, Eric has appeared on almost 40 recordings, singing and playing many different instruments including bass, banjo and triangle. His song Bloodshot Eyes was nominated in 2010 for Song of the Year by Offbeat Magazine, and his song Katrina was prominently used in the HBO series Treme as well as the film You’re In Charge. Eric has been featured on 4 GRAMMY nominated recordings, including the 2012 Grammy Award Winning Best Regional Roots category, for The Band Courtbouillon.

The workshops will be followed by a square dance at 8:00 PM, with the Extravaganza Band:  Brad Leftwich, Jamie Gans, Clelia Stefanini, Eric Frey, and Sam Bartlett.  Tamara will be calling the dances.  No experience necessary, and you don’t need to come with a partner. 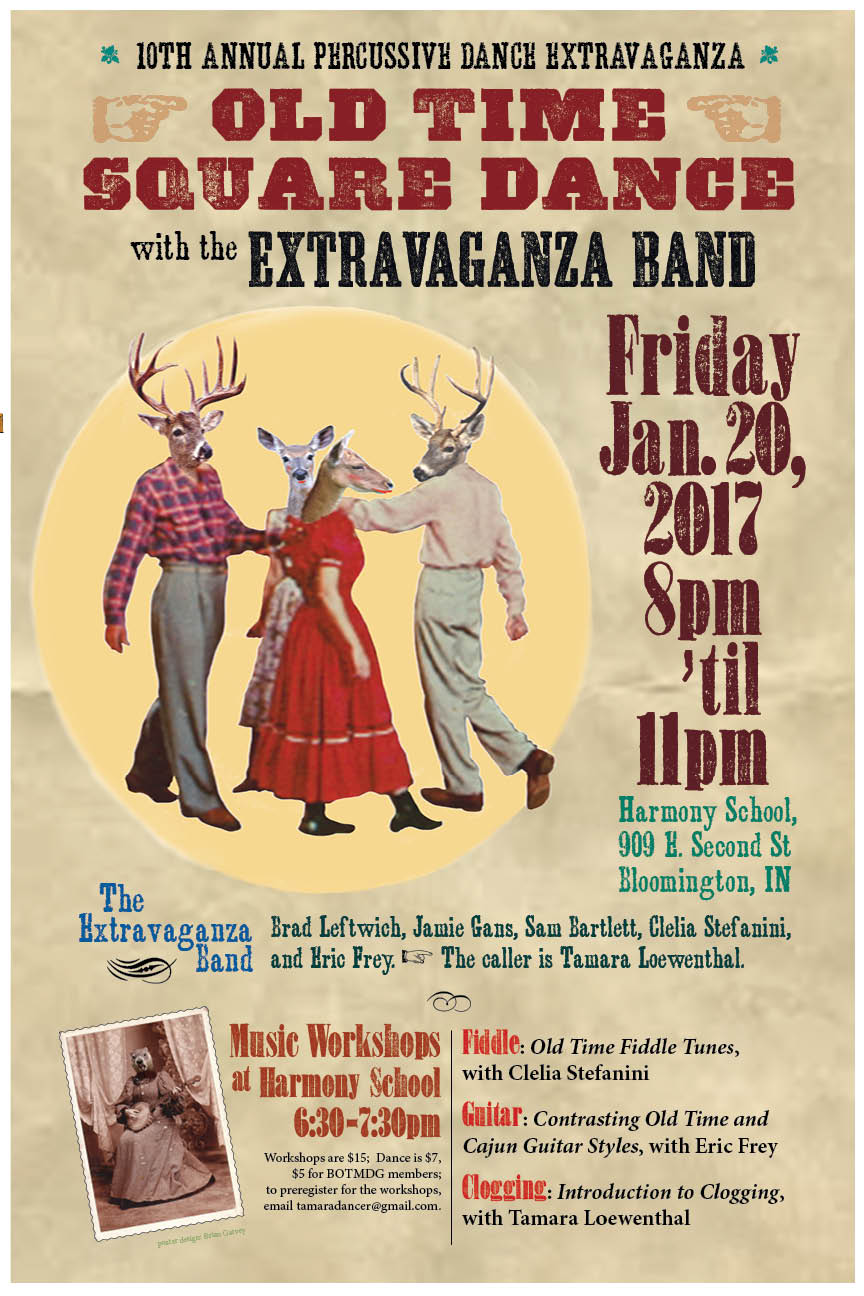