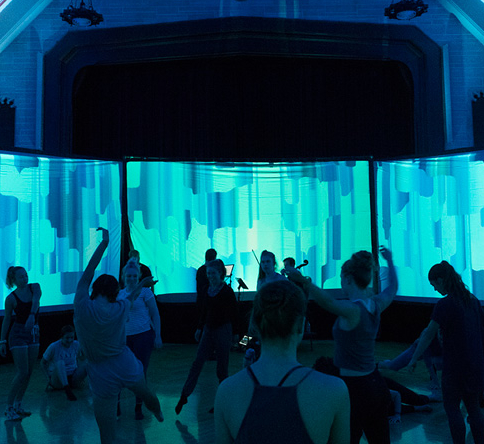 The Big Tent, a 360° video and audio projection installation/venue (free, located at 4th & Washington), leverages immersive technology to create a unique, communal viewing experience at Alumni Hall (located in the Indiana Memorial Union). In this age of individual hand-held screens, The Big Tent echoes the Lotus ethos in creating opportunities for people to interact and share a transformative multimedia experience.   Students and faculty from across the IU and IUPUI systems have been artistically challenged to create meaningful, original work for this large-scale, A/V-surround environment, and the results include a bachata workshop, live performances, experimental film/cinema, game design, real-time video capture, archival celebrations of the 25-year Lotus journey, and more.

Sensory Sensitivity Advisory
A very small percentage of individuals may experience epileptic seizures or blackouts when exposed to certain light patterns, flashing lights, or backgrounds on an electronic screen. If you, or anyone in your family, have an epileptic condition or have had seizures of any kind, please take proper precautions before viewing.

Some people may experience motion sickness, nausea, disorientation, blurred vision, or other discomfort while experiencing multimedia content. If you, or anyone in your family, get motion sickness easily, please take proper precautions before viewing.

Soaring over Four
Rush Swope, Artist
Norbert Herber, Soundtrack
Take to the skies over 4 massive biomes and explore sweeping, panoramic landscapes. Take control of The Big Tent like never before and immerse yourself on all sides with natural beauty ranging from vast desert to frozen tundra.

Dear Everyone,
Blake O’Brien, Filmmaker
Rachel Davison, Actor
John Kwon, Score
Andy Bullard, Driver
Using the Big Tent screening format itself as an impetus for this project, it investigates visual possibilities of a 360 degree viewing situation, and what kinds of implications are inherent therein in relation to developing content for the images. A desire to create synchronicities and relationships between screens, drown the viewer in saturated, colored light, and address the psychological implications of the container-ness of the space led to the decisions represented in the film.
Dear Everyone, was shot on Kodak color film with a Bolex Reflex camera, often with Kodak color filters. Some of the film was manipulated by chemical and painterly means. It was then edited digitally in Adobe Premiere. Spliced images were created manually with a matte box during the shooting process; the shots-within-shots were achieved digitally.

The Sound of Someone You Love Who’s Going Away And It Matters
Blake O’Brien, Filmmaker
John Kwon, Modular Synth
Kyle Quass, Trumpet
Andy Bullard, Driver
Menika Lue, Hand Actress
Jessica Westhafer, Hand Actress
Using the language revolving around the broad theme of containment/holding/having, and what these kinds of words mean in the contexts of the moving image and human connection, and how these parallels relate to one another and the Big Tent screening format, this project is a somewhat lateral approach to excavating the contradictions and irony in love, i.e.: the fear and myopicism that accompanies it, etc. In addition to being an investigation into these words associated with both visual and emotional relationships within the content of the images and how they are composed, the screening format was also deliberately considered. In an effort to create a sensuous contrast between the world of the screens and the viewer’s world of containment within them, brightly saturated, monochromatic images are used as a means to stimulate the viewer visually with color in its purest form: light, while the musical performers’ improvisations function as an anxiety-inducer. This creates a syntax between the real space of the event and the content of the film images, keeping the viewer in a kind of purgatory between mindfulness of the space they are in and the illusionistic world inside the screens.
The Sound Of Someone You Love Who’s Going Away And It Matters was shot on Kodak color film with a Bolex Reflex camera, often with Kodak color filters. It was edited digitally in Adobe Premiere. Spliced images were created manually with a matte box during the shooting process; the shots-within-shots were achieved digitally.

Candor
Sabra Binder, Artist
Ray D. Kim, Musician
Chloe Zumbrun, Actor
Ben Zumbrun, Actor
Inspired by Anne Carson’s Float, the film Candor is a study of emotions experienced in singularity. Contemplative over her position in a failing relationship, the small movements and actions of the body take the place of an obvious narrative, each motion indicative of the intricate emotional responses in the mind. Through this, Candor hints at a narrative without offering a concise explanation. We ask the viewer to contemplate why it is they’ve arrived at their own interpretation.
The score to Candor, Color Shift by Ray D. Kim, depicts a scenic sensation of color shift and phasing throughout the screens. The visual sensory motivations trigger the shifts of the musical color and its sound texture. Although the piece was written with a direction in mind, the multispeakers allow the audience to experience it in an omnidirectional fashion all the while experiencing the phases that the picture shows.

Reading
Sabra Binder, Artist
Cole Swany, Musician
In Reading, letters are assigned to moving images. These images are then rearranged across the screens to spell words out of the letters they were originally assigned to. If the audience allows their understanding of the alphabet to be redefined by these images, they will be able to interpret different patterns of these images as the words they spell out, essentially learning a new language through video.

Tallgrass: An Osage Reverie
Aaron Higgins (MFA, 2009), Video & Compositing
Norbert Herber,  Soundtrack
The prairie imagined in a reverie, these videos first appear natural, but are a façade; expanding a moment with highly composed moving image and generative sound. “Recreating” the landscape, or recreating an idealized version of the landscape, this body of work is presented in Big Tent as a collage of photos and video taken in the Tallgrass Prairie Preserve of Osage County, Oklahoma. Dream-like composites of flora and fauna merge with a composed soundscape. This, like the Tallgrass Prairie itself, is a mediated environment, where reclamation and preservation of native species is an ongoing and deliberate act, carefully managed by conservation experts to recreate the prairie as it existed until the mid-1800s. The work includes icons of the region such as scissor-tailed flycatchers, Oklahoma’s state bird, and American Bison which once roamed the vast prairie in massive herds.

Fire Song
Susanne Schwibs, Film
Felipe Tovar-Henao, Music
Fifty years ago New Zealand composer Annea Lockwood created her avant-garde score “Piano Burning” (1968). Only a  few years before Kodak invented Super-8 film, a medium favored for home-movies and avant-garde films alike. In February of this year, Annea Lockwood came to Bloomington to participate in the Wounded Galaxies 1968 festival which recreated the piano burning.  Lockwood specifies an upright piano beyond repair and asks to “play whatever you can for as long as you can.” “Fire Song” was shot on super-8 film and created for display in the round. The musical score takes advantage of the uncertainty of the listener’s location, and plays with how unnerving it can be to unsuccessfully predict where sounds and images are going to come from. Walk wherever you wish and listen “for as long as you can.”

Exquisite Corpse
Susanne Schwibs, Film
Norbert Herber, Sound Design
Tony Brewer & Joan Hawkins, Poetry
Joe Stone, Digital Videography
“Exquisite Corpse” is a game invented by the surrealists around 1920. Players write or draw on paper, fold it over, and pass it on to the next players for their contribution. The hand-drawn and scratched images of this film were created similarly: we asked participants of an IU First Thursday event, to draw whatever they wished on 12 frames of film. These were then cut up and combined with the contributions of other creative participants: The voices and poetry of Joan Hawkins and Tony Brewer, additional video by Joe Stone, and the music piece “Timeshift” by Sue Singer from the commercial Music Library Killertracks. We hope you will find the resulting corpus to be exquisite.
Additional thanks go to Laura Ivins-Hulley for her enthusiastic instructions to the First Thursday passers-by, and to Andy Uhrich, Dan Brown and Lauren Math for providing equipment and ephemeral movies.

LotusTime
Jim Krause, Animator/Photographer
Journey through 25 years of Lotus in this multimedia timeline. From humble beginnings, the Lotus Festival has grown in size and scope into one of the nation’s preeminent world music festivals. LotusTime distills images, music, artwork, and facts into an immersive and informative festival experience.

Wishes + Fractured Vision
Sarah Edmands Martin, Animation, Design & Soundtrack
Benjamin Sunderlin, Voice of Narrator
Wishes + Fractured Vision explores a kind of dark storytelling that eschews formulaic children’s narratives in order to promote self-efficacy, learning, and participation. The medium of fairytale offers a safe space outside our normal expectations as an axiom where assumptions can be manipulated, ultimately prompting us to ask a different set of questions. I am interested in dispelling the “happily ever after” privilege and complacency that can occur in young readers who consume too many derivative regurgitations of narrative. This works seeks to reclaim the wondrous and inexplicable that becomes lost in cookie-cutter stories that are designed to sell and re-sell. This work navigates difficult themes such as identity, heritage, greed, and failure, while also helping a viewer accept that bad things happen to everyone.

Macro Perspective
Adam Cook
Kelly Lee Webeck
Victoria Q. Ridgway
Song Li
Nicole Wilson
Scott Whitworth
Kate Houliné
Morgan Stephenson
Kristoffer Johnson
Liliana Guzmań
This collaborative video piece depicts the visual anomalies of the world as seen from a macro perspective. Presented on large-scale video monitors, this optical phenomenon brings to the forefront a “larger than life” world not generally recognized by the naked eye. These macro images engulf the viewer, placing them in the center of a universe much smaller than their own, allowing for complete observation as the scenes meditatively shift through various depths of field. This collaborative piece not only represents the macro world but will also enable the audience to experience a reality far different, yet closer, than their own.​ Produced by photography MFA students in the IU School of Art, Architecture + Design.

Preliminary rehearsals were hosted by the faculty and administration of the Jacobs School of Music. Thanks to:

Big Tent is a creation of Benjamin Smith, D.M.A. and Robin Cox, D.M.A., both faculty of the Purdue School of Engineering & Technology, IUPUI.  Content development on the IU Bloomington campus is led by Norbert Herber, Ph.D., of the IU Media School.