Lifelong Lotus patron (and current IU freshman) Emma Percival has been coming to the Festival since childhood, and this year she volunteered for the first time.  Emma shared with us her thoughts and reflections on the Festival, its influence on her life, how it can impact youth, and the thrill of being a first-time volunteer.

Growing up at Lotus:

Ever since I was little, the Lotus Festival has been a huge part of my life. My parents have taken me to every Festival since I was four or five (and maybe younger) to see all sorts of artists, many of whom we would play around the house in the off season–a lot of Buckwheat Zydeco, Chico Cesar, and Mahotella Queens, to name a few. Even when we moved to Louisville, KY, we still played those CDs around the house and we still came back for more every year. One of my earliest Lotus memories was getting to see the Mahotella Queens live when I was about seven or eight, a dream come true. I was right in the second or third row, sitting on the floor, and I just remember being amazed by how bright colorful everything was, from their clothes made out of different patterns of kente cloth, to the music they were able to make with just their voices, to this one special moment where one of the Queens looked down and smiled right at me. I remember I didn’t stop smiling for the whole performance. My mom always said that I would get into sort of a trance whenever I really liked a band I was seeing live–I wouldn’t move, I wouldn’t even blink, and nothing could distract my attention from the band I was seeing. Many bands, including the Mahotella Queens, have managed to capture my attention this way: Kardemimmit, Väsen, Monkey Puzzle, Red Baraat, and a whole host of others. 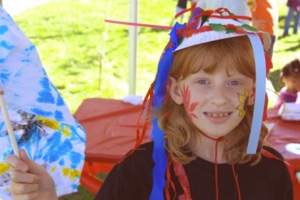 Lotus in the Park also came to be one of my favorite events of the year–with all of the awesome face paint and instrument-making opportunities, I couldn’t resist. I remember one year going to get my face painted I felt really special, because I was the only kid to ask for the Lotus symbol to be painted on my face! Even as a kid I loved the festival so much, but now I appreciate my experience even more because I realize being exposed to such a diverse array of cultures has broadened who I am as a person. 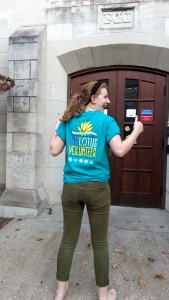 As soon as I knew I was coming to IU, I knew I had to volunteer for Lotus–I was finally old enough and finally close enough to be able to do it, and it ended up being an awesome experience. This year I was lucky enough to volunteer in my first choice area, artist hospitality, and when I saw the 2015 lineup and realized I might get to meet some of the artists, I admittedly freaked out just a little bit. And I really was able to meet a lot of the artists–I answered questions about massages for some of the members of Kardemimmit and others, a couple of the Fanfarai guys introduced themselves to me at the door, and of course I was also just there to smile at band members going in and out of the suite. As assistant to the house manager, I was mainly in charge of making sure all the drinks were refilled (especially the all-important coffee) and that all the trash on the tables was picked up, but I also helped with other team members’ jobs if they needed it and I helped with the dishes at cleanup. It was funny, but even such a mundane task as filling the coffee pot was enough to make me feel important, because I was the only one who knew how to do it! By the time we were nearing the end of our shifts during cleanup, there was still so much more to do, so I stayed as long as I could to help load stuff into the van, but sadly, I did have to go before it was all done. But that’s the thing–I enjoyed volunteering so much that I really did want to stay longer, despite having a sinus infection and a lot of homework to catch up on. Lotus was such a big part of growing up for me that I really wanted to help out to make another great festival where maybe there were a few little kids who would grow up with and grow to love the festival as much as I do.

Lotus is a great festival for any age, but I think it is most important for teens and young adults to go, because it’s an age group where I feel like we have the most opportunity to both learn from the festival and help the festival continue to be amazing. Lotus is the best place to experience a huge amount of cultures all at once in a way that is easily communicable across cultures: music and art. It’s a lot of fun, and it’s really important, so I would encourage anyone my age to go!

Lotus receives grant from National Endowment of the Arts