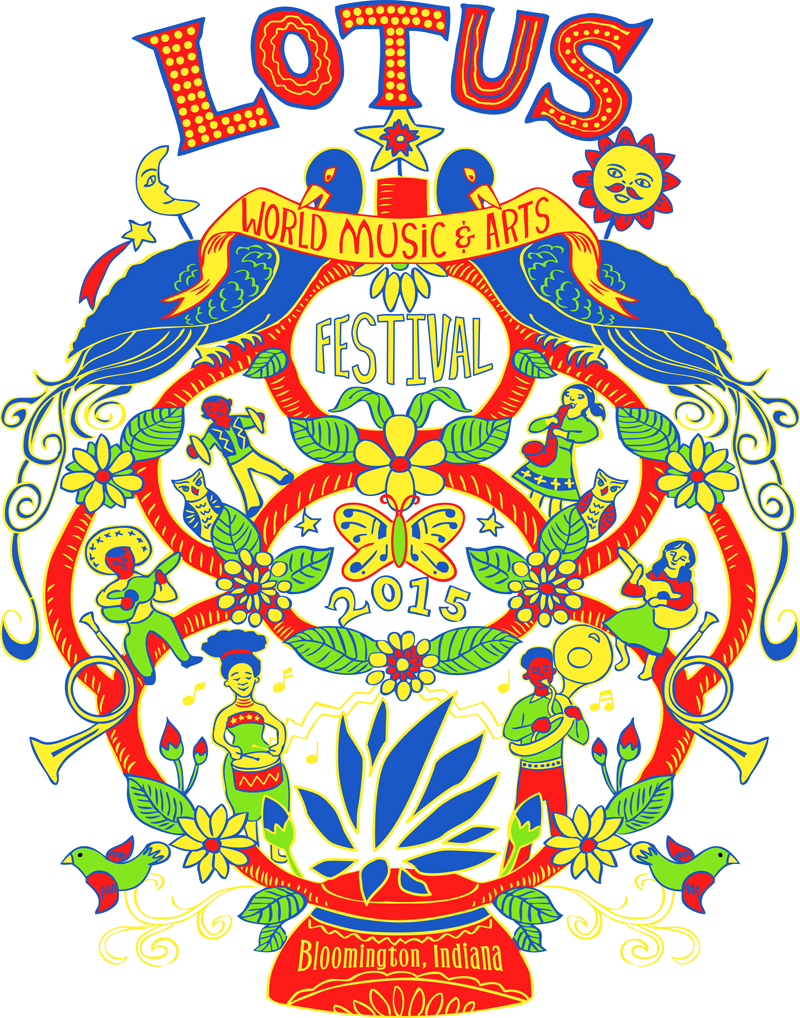 The 2015 Lotus World Music & Arts Festival artist is Vincent Desjardins, an illustrator who originated from Southern California and received his MFA in printmaking from the Otis Art Institute in Los Angeles before he got a job in the field of computer graphics. Vincent moved to Bloomington in 2007 while his partner completed his PhD at Indiana University, and shortly thereafter he began illustrating children’s books.

While concepting designs for the 22nd Annual Lotus World Music & Arts Festival, Vincent wanted to create an image that united world cultures under the umbrella of music. He found inspiration in a book about the animated film “The Book of Life”, a movie that celebrates Mexican cultural traditions. Intrigued by the Day of the Dead figures that are typically represented as skeletons playing instruments, Vincent researched the imagery and came across Tree of Life candelabras. Then according to Vincent, “The idea clicked into place.”

He continued, “By using the form of a Tree of Life candelabra, I could create a structure that would look festive and at the same time could integrate a musical band, along with flowers and birds which are often featured on Trees of Life sculptures. I think my design, by using imagery usually associated with Mexico, signals to viewers that the Lotus World Music and Arts Festival will be an event where one can experience a sampling of other cultures.”

Vincent’s birthday falls at the end of September, so attending the festival is now part of how he celebrates his special day. “As I walk around the streets of Bloomington during the festival, seeing people from all over the world getting along and enjoying the music, I always want to know why the World can’t be more like the Lotus Festival,” he said. “If Music and Art can bring people together, than surely there is hope for the world.” 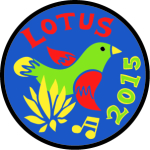 For more information about Vincent and his work, please visit www.vincentdesjardins.com.

To purchase the 2015 T-shirt and Pin that Vincent designed for Lotus, please visit the Festival Store.  Pins are also available in advance at the Buskirk-Chumley Theater Box Office, Bloomingfoods, and Landlocked Music.  Your pin purchase supports Lotus’s year-round programming in our community, and it also get you into the World Spirit Concert, Lotus’s beautiful closing event on Sunday, 9/27.