Lotus Blossoms opens the wider world to young people, connecting K-12 students directly with performing artists from all over the globe.  Serving children, teachers, and families since its inception in 1996, Blossoms creates up-close cultural encounters through music and dance performances in schools, workshops, classroom visits, the “World Bazaar” multicultural fair, and more. Over the last 25 years, the Lotus Blossoms program  has reached more than 150,000 students and counting.

Sponsor a school for Lotus Blossoms and bring the world to our schools!

See a snapshot HERE of 2019 Lotus Blossoms highlights and impact.

At the heart of Lotus Blossoms lies our spring residency program that connects world artists directly with children. Each year, Lotus hosts a roster of 5-8 global teaching artists who travel to perform in schools and classrooms across a multi-county area in south-central Indiana.  Musicians, dancers, and storytellers share their cultures and heritage with thousands of students through performances and interactive activities, and they field student questions about their lives, childhoods, and experiences.  For many students, especially in rural communities, an encounter with a Blossoms artist begins a lifetime of curiosity about the wider world — the first sounds of a different language, the first conversation with someone with a different skin color, the first glimpse of a broader horizon.  Want to bring an artist to your school?  Click here to learn more!

The second pillar of Lotus Blossoms is the annual Lotus Blossoms World Bazaar, a two-day “mini festival” that is now hosted at Fairview Elementary School in Bloomington.  Created in 1996 with the help of area teachers, the Bazaar has become a tradition in Monroe County schools — public, private, and charter — as volunteers from the Bloomington community (and around the world) present arts, music, language, and international crafts that let kids get their hands on the world.  The first day of the Bazaar is just for schools, when Lotus buses in 1,000+ fourth-graders for a day of multicultural discovery. On the second day, the free Saturday World Bazaar Family Day welcomes children and families from across the community.

And Lotus Blossoms isn’t just for schools!  We partner with a range of social-service agencies to bring Blossoms to at-risk youth in our region, and we also connect artists with senior citizens, participants with developmental disabilities, and more.  Lotus also offers free community events with Lotus Blossoms visiting artists each spring.  From workshops and lectures to performance-based presentations, these events are open to the public and provide unique opportunities to meet top-notch artists from around the world in intimate settings.

Since 2001, more than 45 artists from 28 countries/areas of the world (including all continents except Antarctica) have visited students in south-central Indiana schools and our community. 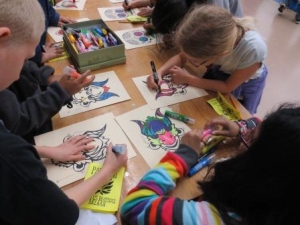 Masks Around the World at the 2014 Bazaar 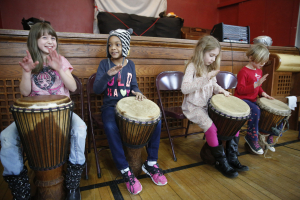