The Lotus-Fitzgerald Endowment balance has doubled in just two years, now totaling nearly $400,000. We owe special thanks to the year-end donors who chose to add a little more to their annual gift to help us increase the endowment, and we hope our generous donors and friends will keep this momentum going as we look ahead toward our $1M target. 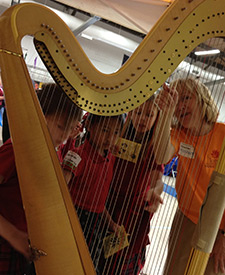 “It can be a challenge for a small nonprofit, like Lotus, to focus its energies on funding an endowment,” says Lotus Development Director Kristin Varella. “But as Lotus finishes its second decade, we know that the time is right to work a little harder to ensure a reliable income stream for the future. We’ve made great strides toward this goal.”

Since 2006, the Matchstick program has added more than $50,000 in matching funds to our endowment. The number of contributing donors has also continued to grow. In 2013, 79 individual donors contributed to the endowment, more than double the number in the previous year. Many donors have discovered that they can make “stretch” gifts of $5,000 or $10,000 by breaking gifts into smaller amounts over several years. Others have chosen to double their year-end annual donation and put half of it toward the endowment.

“All endowment donors help make Lotus sustainable, no matter the size of their donations,” says Kristin. “I’m so lucky: with each new donation, I get to share the love these donors have for Lotus. This is an exciting time.”

If you’re interested in helping the Lotus Education and Arts Foundation be part of the Bloomington cultural landscape for generations to come, contact Development Director Kristin Varella at {kristin} at {lotusfest} dot {org}, 812-336-6599.