The first twenty years have been good to Lotus — and we’re growing our endowment, to ensure that the Festival will be around for another 20 years. Donors like Paul Sturm are helping us realize that vision. “The best way I can feel fulfilled in my relationship with Lotus,” he says, “is to create a foundation for its future.”

Paul and his wife, Chris Lamar, were the first donors to make a multiple-year pledge to the Lotus-Fitzgerald Endowment, committing to a gift of $10,000. A longtime Lotus fan and volunteer, Paul remembers when Lotus received a seed gift from the Fitzgerald Family to create an endowment, 15 years ago. “I was thrilled with how forward thinking this type of commitment was for such a small, young arts organization.” 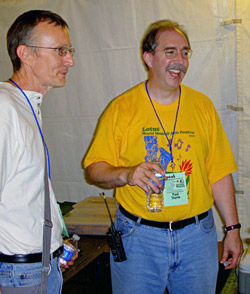 When he learned Lotus was focusing on endowment efforts in its twentieth year, Paul says, “I decided to own Lotus and invest in an endowment that will work toward ensuring its future. I realized how much I love it and all that it does, and all the lives Lotus touches. I wanted to shift beyond being a consumer to being a stakeholder. I needed to make a large financial contribution to help build a secure financial base to carry this organization forward.”

Paul and Chris were able to make a sizeable pledge by cutting back on other areas of giving, investing in Lotus for a set period of time to help the organization become more sustainable. “It’s like buying a car,” Paul says. “You can make large contributions over time.”

Paul’s desire to see Lotus thrive for future generations is inspired by his Festival experiences. “I carry a constant mental picture of seeing and hearing amazing international music of a very high caliber, all happening at once in a concentrated area. It’s so cool to me, I can almost taste it; I can certainly hear it. I have never experienced such a tremendous diversity of music-making in such a small area.” 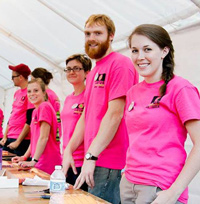 He’s also inspired by the effort it takes to make each Festival happen. “I love seeing the ocean of volunteers. It’s an immediate visual representation of the level of community participation that Lotus attracts. To see over 500 volunteers spread out over two or three nights, all wearing the same t-shirts and smiles, is part of the Lotus scene.”

Like Paul Sturm and Chris Lamar, you can help Grow a Perennial Lotus: our nonprofit is participating in the Matchstick Challenge program of the Bloomington and Monroe County Community Foundation: this means that your donation to the Lotus-Fitzgerald Endowment is matched, 1 : 2, making your contribution even more valuable.

To find out how to donate to the Lotus-Fitzgerald Endowment in a way that works for you, contact the Development Director Kristin Varella at the Lotus office (812-336-6599; kristin {at} lotusfest {dot} org).

Lotus receives grant from National Endowment of the Arts